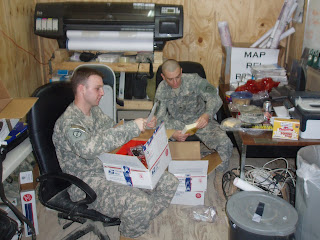 I just wanted to take the opportunity of this update to thank everyone who has kept us in your thoughts and prayers. We've had some updates in my shop as well. SPC __________ has been promoted to Corporal (CPL) following his successful passing of the board. We will soon have another officer join the shop; an opportunity to mentor someone after being stuck at BDE for so long. Two of my soldiers are now living down at the Company JCOPs (Joint Combat Outposts) providing forward deployed Intelligence Support to the Rifle Companies (This is cutting edge for a BN S2 shop). Some soldiers have already completed their leaves (or environmental morale leaves –EML), while others still have that to look forward to. Another soldier, SPC ______________, will be going before the board at the end of this month (hopefully). So there has been some growth in the shop.

I also wanted to say thank you to everyone who has supported us in thoughts, prayers, and/or with care packages. It really means a lot to get something from home. Our office now has a great Harley Davidson poster on the ceiling (we were out of wall-space). Some would say the ceiling poster features Marissa Miller a bit more, but the Harley is still prominent (and as a Milwaukeean, it's the focus). SFC ___________ is a big Oregon State fan and received the official wall calendar of their Dance Team, so his desk space is properly adorned with Beaver Pride. We've also got a Brewers wall poster. There are Packer hats throughout the office, a Cowboys hat (SSG ________'s), a Camouflage Cubs hat and there are still some Christmas Decorations up.

Hardly a day goes by that one of my soldiers does not receive a package. In many cases it is from someone who they have never met, but who took the time and care out of their busy lives to adopt a soldier. They received holiday packages with gifts and candies at Christmas and it definitely brought many a smile to a soldier's face. It meant a lot and I cannot begin to express my gratitude for that adoption. Packages continue to roll in with candy and magazines. (Thankfully, I think overall the shop is at a net-weight loss, despite all the candy.) We've received boxes of books which have helped bolster FOB Legion's mini-library at our Morale, Wellness and Recreation Center (MWR). There is quite an eclectic reading collection, something for everyone. The number of Hunting and Fishing magazines we've received (a staple in Wisconsin) really resonates with the soldiers in the battalion (we are Alaskan after all). There is so much in common between Wisconsin and Alaska.

We've also begun to receive many packages of school supplies and beanie babies. The compassion of the average American to people in hardship is something that highlights a true positive of American character. Whether it is Hurricane Katrina or the Tsunami, the American people open their hearts. Iraqi children love to receive school supplies, soccer balls and stuffed animals (less so the boys of course). The boxes of school supplies and beanie babies we have received will enable every patrol that leaves the wire to carry at least a few gifts for the children.

Again, just let me say thank you to everyone for your thoughts, prayers, and/or care packages. They have boosted the morale of all of us in innumerable ways.
Posted by CatholicSoldier at 8:16 PM