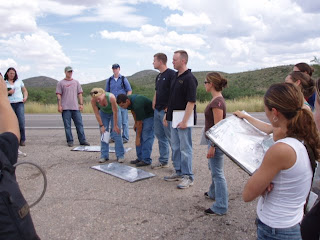 It was brought to my attention that in my last update I had left a few hints about the Military Decision Making Process (MDMP), but hadn't fully articulated what it involves for the non-military audience. The MDMP is a means of analyzing a mission and producing the plans for implementation. It is the process by which the military takes a problem set and works through it, through issuing the order and then supervising the actual mission being conducted.

The first step in the Military Decision Making Process is "Receipt of Mission". This is probably the simplest step and involves the unit and staff receiving the higher units order and its tasks to maneuver units. With this information, we can now begin to plan how we will attack the problem-set.

The next step is Mission Analysis. The BN S2 (the Battalion Intelligence Unit) has a significant role in this stage with Intelligence Preparation of the Battlefield (IPB). IPB involves analyzing terrain (both geographic and human) and its impact on friendly and enemy forces. This stage also requires the S2 to present the enemy courses of actions and capabilities. By providing an effective and thorough IPB, the S2 assists the other staff sections, particularly the S3 (Operations), to shape the operational plan to overcome the potential obstacles that exist. Mission Analysis also requires the staff sections to analyze the mission and identify specified and implied tasks that exist for their respective sections. The staff section also has to analyze what the specific section can bring to the fight and what the limitations (must do) and constraints (must not do) are as well.

With the completion of Mission Analysis (though the S2 assessments must be constantly updated), the MDMP process enters Course of Action (COA) development, analysis, comparison and approval. This stage involves drawing up several courses of actions that outline different ways to attack the problem set. The staff as a team develops several COAs, each one at least slightly different than the others in order to provide the commander (the decision maker) the widest range of options. The staff then analyzes the different COAs (pros and cons) and then compares those using pre-established criteria. This allows the staff to select a specific COA for recommendation to the commander, while at the same time presenting the other COAs for his review. The Commander then chooses the COA he wants the unit to undertake or he creates a new COA by combining pieces of different COAs.

With the COA being accepted by the commander, the staff enters Orders Production. Everything that has been done previously builds into this step, enabling the staff to articulate the mission, the Commander's intent and key tasks, the desired end state, the concept of the operation (with tasks to maneuver units) and coordinating instructions. This order is then given to the executing units. The staff then steps back, provides assistance as requires, and assists in supervising the execution of the order.

The MDMP process is not only useful for the military. It is a way, though not the only way, for a private company to attack a problem set. Maybe the government could benefit from using the MDMP as well.
Posted by CatholicSoldier at 9:06 PM

Strengths, Weaknesses, Opportunities, and Threats (SWOT) Analysis models, albeit the 'swot' acronym compresses a good deal of 'stuff' into only 4 words.