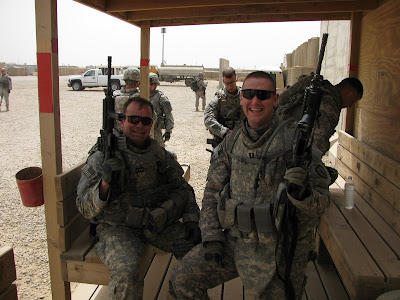 During down times during the work days the staff will occasionally congregate in an office, lean back in the chair, and talk. We don't necessarily talk about our day or sports, but the Global War on Terror, the future of Energy and the Environment, Economic Freedom, etc. Yesterday we were wondering if this is what a "Think Tank" does all day. If it is, we all agreed, it is the job we desire. An opportunity to lean back and be paid to talk about the world and ideas.

The Global War on Terror should properly be viewed as The Long War. It is a war whose end we won't perhaps see in our lifetime, yet it is a war that is certainly worth fighting. Bill Roggio maintains one of the best blogs on the internet at The Long War Journal. The blog is properly named and charts the long war (eight years so far) against Islamic (Takfiri/Salafist) Terrorism. His site doesn't just track the War in Afghanistan or Iraq against Al Qaeda and Shi'a Extremists, but also the War on Terror in the Horn of Africa, in the Maghreb (North Africa), Pakistan, and the Philippines. It is a site that merits one's time and attention because through it one can see just how GLOBAL the Global War on Terror is and has become.

But what is victory? Victory in Iraq was overthrowing Saddam - in that sense the Mission was accomplished. However, there is also more to Iraq that removing Saddam. Now we are both building the first attempt at a democratic nation in the Islamic Middle-East and defeating a violent terrorist network. Neither goal is easy and Congress, former President Bush, and President Obama understand that and have articulated that fact.

Yet when we leave, and the Bi-Lateral Security Agreement (SOFA) puts that end in site, is it over? The answer is no. In reality, we won't be able to judge Iraq a success or a failure in 2010. We won't be able to do it in 2011 or 2012. 2015 will be a stretch as well but by 2020 we might be able to formulate an initial judgment. Even then, as a war of ideas and for the very soul of a society, it will continue long after.

The American Civil War ended in 1865, yet one could certainly argue that victory really wasn't achieved (in that the Emancipation Proclamation made the war about slavery) until 1964, nearly 100 years afterwards. Others would argue that it wasn’t until 2008, when America elected her first Black President, that victory (equality, an idea) was truly achieved.

In many ways, that long view of history is the lens through which we must view the Global War on Terror. It is a war against a violent Takfiri/Salafist ideology within Islam that will take generations to defeat.

It is the Long War.
Posted by CatholicSoldier at 10:44 AM