War on Terror and Globalization 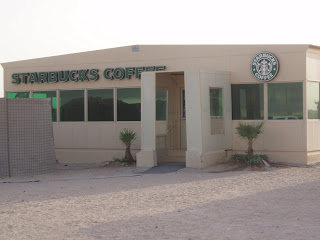 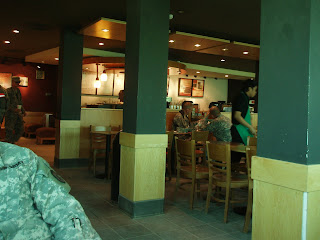 Historically, war is an essential part of human cultural development. That is not to say it is a positive. St. Thomas Aquinas viewed war as an evil, albeit at times a necessary one. But war is an essential element of the human story. From mankind’s earliest days of civilization in Mesopotamia to our “Post-Modern” age, war is ever present.

As a result, it should come as no surprise that war in this age represents and has the trappings of the age. We live in an Age of Globalization where the nations’ economies are bound to one another, where companies transcend nations, and the trappings of one’s country can be found across the globe. Even the War in Iraq (and Afghanistan) features these examples of our new global age.

Camp Buehring is a temporary US Military Base in the Kuwait. The US Military complex in Kuwait is far away from Kuwait City (out of sight, out of mind), yet while undeniably alien, it has many of the trappings of home. I remember upon arriving being told that I had to go to Starbucks. Starbucks is an all-American brand. It is found at numerous street corners throughout the United States and increasingly the world. It has arrived in the Global War on Terror. I am not a coffee drinker, I have not yet developed that habit or vice. But I went. On the outside, it looks like any other military structure on Camp Buehring. Surrounded by Hesco barriers to protect it from indirect-fire that will never come, it is painted in the same drab colors as everything else. But then you see the marquee: it is the same Starbucks sign one would see in Seattle, Chicago or New York. you walk inside this Starbucks and you are in the same coffee shop one finds in any American city with the same interior decoration of Starbucks anywhere.

There is one notable difference, however. The negative of the global economy is out-sourcing, or so that is the conventional wisdom. The baristas at Starbucks Kuwait are not the attractive college coeds of the rest of the United States. They are third country nationals (TCN) who are contracted by Kellogg, Brown & Root (KBR, the former subsidiary of “evil” Halliburton, if one buys the typical liberal rhetoric). These TCNs hail from the Philippines, India, or any other developing country. In fact, one notes the startling lack of American workers on these FOBs or Training Camps in Kuwait (the same is true for bases in Iraq). DFAC workers, PX cashiers, maintenance staff are all workers out-sourced through American companies. The global labor market, and the promise of employment and pay, results in a truly global workforce on these American military installations.

American Contracting Companies (Contractors) have been vilified for their actions and money making during the Global War on Terror. The truth is, without their work, American soldiers would not enjoy the quality life that is present here in Iraq, Kuwait, or anywhere else as part of the GWOT. Now, obviously, FOBs can differ. KBR here on FOB Warhorse is not nearly as timely and user-friendly as that found on FOB Courage or FOB Marez. That is part of any business, trans-national or trans-regional, which operates in different places. These companies contract with local nationals (LN) and TCNs to provide many of the comforts of home. They also provide and oversee the famous “Hajji” stores that are the bane of every movie studio in the United States. These Hajji stores sell rugs, jewelry, leather products, local cell phones, electronics, and of course, “Hajji” versions of the latest US movie releases and TV shows. If there is a market for the item, it can probably be found (which requires the vigilance of FOB Provosts to put a stop to anything illegal).

War is part of human culture and civilization. The wars of any period tend to acquire certain characteristics of the age of which they are a part. Wars during the industrial revolution saw the first mass use of artillery and saw increasingly advanced firearms. Wars during the Modern Age saw cars and airplanes (initially viewed as civilian tools) adapted for war. War in the global age has acquired many aspects of the global economy and society at large. Many early armies were followed into the field by camps of followers who provided for and serviced the Army. Today, the US Military deploys in support of national defense priorities and the Global War on Terror with a legion of contractors that provide many of the essential support and many comforts that allow both for the prosecution of the war at large, but also for the morale of the individual fighting soldier.
Posted by CatholicSoldier at 4:01 AM

My husband served in Afghanistan and he surprised us(the kids and I) by telling us that he had a Pizza Hut pizza while he was overseas.