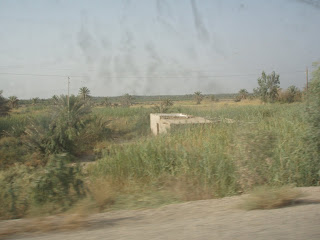 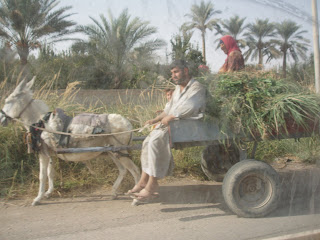 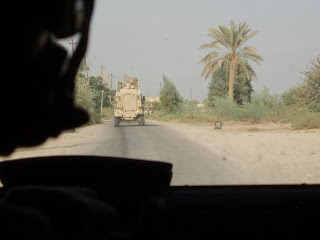 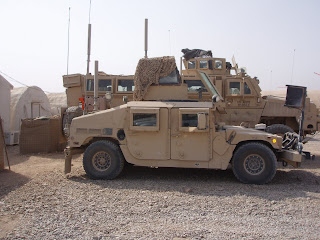 The topic of this update is going to be a Combat Patrol I took with my commander and the TAC, the element that accompanies the commander in the field.

(NOTE, The pictures from above are from an entirely different mission)

We rolled out about mid-morning to head into one of our company's sectors and conduct an Area Recon. An Area Recon is a type of Combat Patrol (Mission) designed to increase familiarity with the Area of Operations by observing the routes, towns, and local national population in a specific area. Our patrol was into one of the many Canal Zones of the Province. Diyala Province is/was the Breadbasket of Iraq. The Diyala River which runs through the province in bordered on all sides by palm groves, date trees, and farmland. The area is intersected by many canals that carry water (in theory) to farmers' fields. Diyala is actually in a middle of a drought (a multi-year drought) and as such some of the canals don't have much if any water in them. There are some areas that appear to be doing quite well, and others that just blind you with their glaring poverty and economic troubles.

Part of our Area Reconnaissance consisted of observing the many routes that ran through this particular sector of the AO. Every major road has a name that is used by the military when referencing it. The most famous route in Iraq is MSR Tampa, which is a Major Supply Route (MSR) that runs nearly the entire length of the country. There are particular themes with naming routes. It is quite common to see routes named after cars (Route Nissan, Route Ford), after cartoon characters (or series of cartoon characters like Transformers), beverages (both alcoholic and non) and at times actresses (not the serious type). It is the way the military names these routes to aid in mission planning and also understand. Anyone who saw "Team America" knows that "backalackdacka" street can get really confusing and doesn't quite roll off the tongue. RTE Pepsi on the other hand is much easier to say and eventually creates a mental image in one's mind of where you are. Obviously these are our names for the routes, the Iraqis have their own.

I spent the entirety of the mounted (in Strykers) part of our Patrol in the airguard hatch of one of our Strykers. I know I promised an actual lesson on Strykers and I promise I will get to that eventually. The Stryker has a Squad Leader hatch from which the SL or PL or other leader directs the Patrol. Next to him is the principle weapon system of the Stryker (ICV variant), the RWS .50 Cal Machine Gun. I recommend checking out “Anatomy of the Stryker” on the Military Channel or Future Weapons for details, but it definitely provides an excellent set of eyes for the vehicle. In the back are two air guard hatches that have two soldiers manning them to provide full 360 degree security. It also provides a great way to see the countryside and familiarize yourself with the terrain. It's easy to lose your bearings and miss things if one is buttoned up inside of the Stryker, the Airguard hatch is a way of having those necessary eyes and also interacting, albeit from a distance, with the local population. My partner in the other airguard hatch was a veteran of the 172nd SBCT's full 16 month deployment. He was able to pass tips on how to best do the job, but also entertaining conversation.

Driving the routes you see farmland that could be quite productive, if water was more abundant. Than you realize that this is the Middle East and perhaps that is too much to ask for. But the rainy season has now arrived here in Iraq and while it will make life uncomfortable, hopefully it will be a full and long one, because the people here deserve and need it. You always see kids running to the Strykers asking for soccer balls and giving you the thumbs up sign. It is difficult to figure out if they are insulting you when giving the thumbs up, or are doing what American children do. In Middle Eastern culture the thumbs up isn't necessarily a good thing, but after five years of close interaction, have they perhaps been Americanized a little bit. It really is hard to determine, you have to judge by the face and the tone of voice. They love soccer balls and always are asking for them. Their is a charity “Kicks for Nick” which honors an American soldier, PFC Nick Madaras, by donating soccer balls to Iraqis with his name written on them (http://cbs2.com/national/Nick.Madaras.CBS.2.288950.html, http://www.kickfornick.org/). It is definitely a worthwhile charity which brings a simple but powerful gift to these Iraqi children who love "the beautiful game". As you drive through the villages, take away the few cars and our Strykers and the maze of electrical wires and you could be transported back hundreds if not thousands of years. The place has that timeless feel to it, while at the same time, being ever so modern.

We conducted a dismounted patrol through a town with the Iraqi Army. The Iraqi Army was motivated and showed up in force to conduct the patrol. What they may lack in professionalism and equipment, they make up in enthusiasm. These joint patrols really are the future of the mission as we begin to take a back seat to the Iraqi Army and their other security Forces. During the patrol we encountered numerous children who ran up to shake hands with our BN Commander. The local Mukhtar and Sheikh also came up to discuss the issues of the town with my Commander. Security is always an important issue, but now other concerns, like schools, water, and electricity are beginning to dominate the debate. That is a sign of progress. We have to temper our expectations I think and realize that Iraq (and Afghanistan) is never going to be like Wisconsin, or even Alaska. It will always be different, it will always be a little more backwards, a little poorer, but it can be more than it was, it IS more than it was, under Saddam (or the Taliban). That is the slow story of success. There were many "Salaams, Shloneks," and other greetings as we patrolled the streets. One has to keep one's guard up, lest one become complacent patrolling in areas like this. It is so easy to become comfortable and safe in this setting, that one has to work hard to ensure to remain vigilant, while at the same time not being distant. That is the essence of Counter-Insurgency. You cannot win a COIN fight by being buttoned up in your vehicles or sitting on FOBs. You have to be out and about with the population, dismounted. It increases ones vulnerability, but it also creates a bond and connection with the population which over time can improve both their and your security.

After completing the dismounted patrol we returned to base. All in all it was an excellent mission and a great experience. I definitely look forward to many more to come (and I know the wife hates reading that).
Posted by CatholicSoldier at 8:45 PM