It's A Small Army 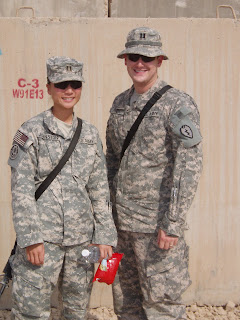 Children who flock to Disney World in Orlando, FL are familiar with every ride and every character whom they meet. In Fantasy World (I am sure I have the sub-kingdom incorrect and thus have horribly shocked and saddened two friends of mine who are obsessed with all things Disney), there is the ride that plays: “It’s a Small World Afterall, It’s a Small World Afterall, It’s a Small, Small, World”. Besides the fact that I find that song completely insufferable and truly have horrid memories of that ride, there is nonetheless some truth to the inanity of the ride. Though as I look back, the ride sure leaves out some things about the world (though, it is easier to imagine the world as a happy place with smiling people in traditional dress, waving at you as you go by and singing that annoying song).

One place where the maxim, “It’s a Small World” holds true is the United States Military. The US Armed Forces is a small and close-knit community. The phrase used by those in the Army is “It’s a Small Army”. The phrase connotes the fact that you are quite likely to run into people with whom you have served with before. Here at FOB Warhorse I have seen the truth of that matter. The S4 for the unit we replaced was a Advance Camp (Warrior Forge) Platoon member from “Garry Owen” back in the summer of 2004. One of the S2s our BDE is replacing is an OBC classmate from Fort Huachuca in the fall of 2005 (our picture is above). When I was at NTC in the Fall of 2007 I met another Platoon member from Advance Camp. My cousin who I first met at Fort Huachuca when I was at MIOBC (Military Intelligence Officer Basic Course) in the Fall of 2005 is here in Iraq at this time. I have a number of ROTC classmates and OBC classmates who are deployed throughout Iraq. It truly is a Small Army.

Thinking of the Army as “It’s a Small Army” led my mind on a few digressions. The US Armed Forces is indeed a small and select organization. It is too small, the Peace Dividend of the 1990s (Both President Bush and President Clinton) resulted in a United States Army that today numbers around 520,000. We once had eighteen combat divisions and a large number of separate brigades, today we have ten combat divisions and a lesser number of separate brigades. Again, I digress. The Military is indeed a small and somewhat exclusive club. In a country of over 300 Million people, less than 1% wear their country’s uniform. When you include those who have separated from Active Duty and the Reserves/National Guard we are looking at maybe 3-4% of the population. Very few industrialized nations bearing such huge burdens, have had so small a segment of the population bear the burden.

It is partly a response to our All-Volunteer Military. The All-Volunteer Military is a Good. It produces a military far better than a conscript (drafted) military. The British Expeditionary Force of World War I was a small, professional, volunteer force that was worth a force at least twice the size. The British in fact did not begin drafting soldiers until after the disaster of the Somme Offensive in the summer of 1916. Britons recognized they had a duty to their country and they answered their nation’s call. The same is true of the small number of Americans who have done likewise. The All-Volunteer Military is one of the reasons we have the greatest military in the world. The sad thing is that too few Americans feel the need or have the desire to serve. There are exceptions. I have two friends from High School, who went to College, graduated and entered what we all call “The Real World”. Today one is an enlisted soldier with two volunteer tours to Iraq under his belt and the other will soon be attending OCS and serving in his State’s National Guard. They have heard their nation’s call. They have answered their nation’s call.

This by no means demeans other forms of service. Service to a Cause greater than onself is a time-honored tradition. The problem is that America is by and large a me-first society. That selfishness extends all the way from the Baby Boomer Generation (No offense to our parents) to the current college one. People may speak platitudes about service and about serving causing greater than our own, but few actually answer that call. They can talk the talk, but they do not walk the walk. It is a stining indictment of the current generations. If we want America to remain the Land of the Free and the Home of the Brave, the current generations must stand up. It is not Government's responsibility to do this, it is ours.
Posted by CatholicSoldier at 5:39 AM

Back in 1969, the barracks were SO OLD that you could literally see the desert-dust floating through the walls in the moonlight.