Meet Me in St. Louis – OK, Not Anymore 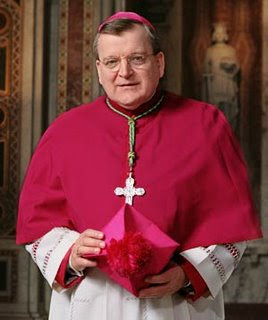 As Rocco Palmo reported in his excellent blog, Archbishop Raymond Burke of has been appointed Prefect of the Apostolic Signatura.

The Apostolic Signatura is the Supreme Court of the Catholic Church, just with a lighter case load than our own Supreme Court. The position of Prefect is an enormously important post, but not one that can influence the affairs of the Church. Archbishop Burke actually has more influence through his position on the Congregation for the Clergy. Every prefect of the Apostolic Signatura has been elevated to cardinal. Raymond Cardinal Burke would than be an elector in the next conclave. He is also only 60 years old and as a result will be voting in Papal Conclaves for the next twenty years should those conclaves be necessary.

Archbishop Burke is an extremely complex figure who elicts strong emotions from both the Orthodox wing and the more liberal wing of the Catholic church. He has done enormous good in priestly formation and the seminary in . Vocations to the priesthood have steadily increased with the assistance and focus of Archbishop Burke, lending credence to the argument that the more Orthodox and faithful a diocese, the more vocations it produces.

He is most famous for announcing that Senator John Kerry would not be allowed to receive Holy Communion at any parish in the Archdiocese of St. Louis in 2004. While correct both in terms of the responsibilities as a bishop and under the Code of Canon Law, it was not necessarily the most pastoral of actions.

In November of 2007, two ‘Catholic’ women were ‘ordained’ to the ‘priesthood of the Roman Catholic Church’ by an excommunicated female ‘Bishop’ at a St. Louis Synagogue. The Catholic Church teaches and confirmed in Ordinatio Sacerdotalis by John Paul II and restated by Benedict XVI that the priesthood is reserved for men only through the example of Jesus Christ and His Apostles. Archbishop Burke excommunicated the two women and began an investigation into the actions of Sister Louise Lears. Sister Lears served on a parish board near the synagogue and led prayer services with the rabbi for the two women who were ‘ordained’. The Canonical Discipline was released in a statement. Archbishop Burke placed Sister Lears under Interdict and prohibited her from holding any mission in the archdiocese.

As the Prefect for the Apostolic Signatura he may soon see the appeal from Sister Lears on her canonical punishments. The Prefect only breaks a tie so in all likelihood he will not have to rule again on this issue.

The cardinal’s hat and his role as Prefect represent a promotion, but what influence he will have, is hard to determine. It is probable that he will have less influence on daily Church affairs from the than if he were still in . The vote in a conclave however, cannot be minimized in its importance. Archbishop Burke will represent a powerful voice for Catholic Orthodoxy, though many will breathe easier now that he is thousands of miles away.

What will be interesting is who Benedict XVI chooses to replace Archbishop Burke in . Burke’s actions have made him a hero to Orthodox and Traditionalists Catholics (he is a proponent of the Traditional Latin Mass) and anathema to Progressives.

Personally I am sad to see Archbishop Burke leave the where so much work remains to be done. But we here in the cannot be selfish and cannot be overly focused on are small slice of the Catholic Church. He did a great deal of good while in and will now go to serve the needs of the around the world. God Speed Archbishop Burke.

In other Church news Benedict XVI opened the Pauline Year at ’s Outside the Walls in with the Ecumenical Patriarch of Constantinople. Rocco Palmo has excellent analysis of the service. The symbol of unity illustrated by their actions give us hope that one day soon both Lungs of the Church [The East (Orthodoxy) and the West (Roman Catholic Church)], in all their fullness, will again, breathe as one.

Posted by CatholicSoldier at 2:55 PM