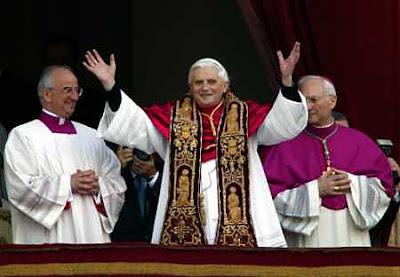 5 years ago today we heard the words "Habemus Papam" announced from the balcony of St. Peter's Basilica. Shortly thereafter we were introduced to Joseph Cardinal Ratzinger, the new Pope.

Pope Benedict XVI took on the heavy mantle left by his predecessor, John Paul the Great. Yet in that time, he has continued to demonstrate his incredible theological acumen and a desire for Christian unity with our brethren in the Eastern Orthodox Church. He has also welcomed faithful Anglicans into the Catholic fold. Pope Benedict XVI is overseeing a renewal in the Catholic liturgy both with the Extraordinary Rite with the Tridetine Mass, but also with the Ordinary Novus Ordo Mass. He has made a series of excellent episcopal appointments and has sought to deal with the sordid past of clerical sex abuse.

Yet, much work remains to be done. The renewal of the liturgy is not yet complete and resistance remains. The false interpretation of Vatican II is still prevalent in many Catholic circles and universities and must continue to be confronted. The reform of the byzantine Roman Curia must also be enacted. Benedict XVI has been a blessing for the Catholic Church and one hopes and prays that God gives us many more years of his leadership at the barque of Peter.

V. Let us pray for Benedict, our Pope.

R. May the Lord preserve him, and give him life, and make
him blessed upon the earth, and deliver him not up to the
will of his enemies. [Ps 40:3]

O God, Shepherd and Ruler of all Thy faithful people, look
mercifully upon Thy servant Benedict, whom Thou hast chosen
as shepherd to preside over Thy Church. Grant him, we
beseech Thee, that by his word and example, he may edify
those over whom he hath charge, so that together with the
flock committed to him, may he attain everlasting life.
Through Christ our Lord. Amen. (Thanks to Fr. Z for this prayer)
Posted by CatholicSoldier at 4:30 PM