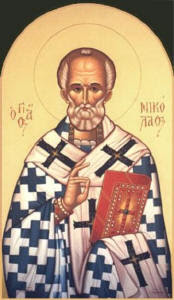 The Roman Catholic and Orthodox Churches celebrate December 6th as the Feast of St. Nicholas. St. Nicholas was a Bishop who overtime morphed or became the inspiration for Santa Claus in the West. Yet, in the midst of the Christmas season, it is important to remember the real person behind the legendary figure.

St. Nicholas or Myra (Smyrna) was a Church Father in the 3rd and 4th Centuries. He was from modern-day Turkey and suffered persecution on behalf of Christ during the reign of the Emperor Diocletian and the Tetrarch Galerius. Following the persecutions Nicholas rose to become the Bishop of Myra. He was famous for charitable giving, in one story, providing enough money for the dowries for a poor man’s three daughters, enabling them to wed. He also confronted the local governor and stopped the execution of three innocent men.

Bishop Nicholas attended the Council of Nicaea (A.D. 325) where the Church Fathers debated with Arius on the divinity of Jesus Christ. A possibly apocryphal story of the council has St. Nicholas slapping Arius (subsequently dubbed by the Church Fathers as the “Arch-Heretic”) after he presented his arguments against the divinity of Jesus Christ. He was kicked out of the council but returned the next day due to the reported intercession of the Virgin Mary who told the Church Fathers that St. Nicholas acted out of love for her Son. Though the Council endorsed the Orthodox position that Jesus was fully human and fully divine, St. Nicholas would spend the rest of his life fighting the Arian heresy.

He was regarded as a Saint by the Christian communities in the East by the 6th and 7th centuries. Nearly 600 years later his relics were removed to Bari following the Seljuk conquests of Byzantium’s possessions in Asia Minor. The Basilica of St. Nicholas in Bari where his relics remain today is holy to both the Western and Eastern Churches.

While much of his history is perhaps legendary, it is clear that not only was St. Nicholas a loving man who lived Christ’s call to charity, but he was also an uncompromising defender of Christ’s divinity and the Christian Faith. He lived “Love in Truth.” Pope Benedict XVI wrote in his encyclical by the same name Caritas in Veritate that Love in Truth becomes the driving force behind proper expression of our humanity:

"Charity in truth, to which Jesus Christ bore witness by his earthly life and especially by his death and resurrection, is the principal driving force behind the authentic development of every person and of all humanity. Love — caritas — is an extraordinary force which leads people to opt for courageous and generous engagement in the field of justice and peace. It is a force that has its origin in God, Eternal Love and Absolute Truth. Each person finds his good by adherence to God's plan for him, in order to realize it fully: in this plan, he finds his truth, and through adherence to this truth he becomes free (cf. Jn 8:32). To defend the truth, to articulate it with humility and conviction, and to bear witness to it in life are therefore exacting and indispensable forms of charity. Charity, in fact, “rejoices in the truth” (1 Cor 13:6). All people feel the interior impulse to love authentically: love and truth never abandon them completely, because these are the vocation planted by God in the heart and mind of every human person. The search for love and truth is purified and liberated by Jesus Christ from the impoverishment that our humanity brings to it, and he reveals to us in all its fullness the initiative of love and the plan for true life that God has prepared for us. In Christ, charity in truth becomes the Face of his Person, a vocation for us to love our brothers and sisters in the truth of his plan. Indeed, he himself is the Truth (cf. Jn 14:6).

Charity is at the heart of the Church's social doctrine. Every responsibility and every commitment spelt out by that doctrine is derived from charity which, according to the teaching of Jesus, is the synthesis of the entire Law (cf. Mt 22:36- 40). It gives real substance to the personal relationship with God and with neighbour; it is the principle not only of micro-relationships (with friends, with family members or within small groups) but also of macro-relationships (social, economic and political ones). For the Church, instructed by the Gospel, charity is everything because, as Saint John teaches (cf. 1 Jn 4:8, 16) and as I recalled in my first Encyclical Letter, “God is love” (Deus Caritas Est): everything has its origin in God's love, everything is shaped by it, everything is directed towards it. Love is God's greatest gift to humanity, it is his promise and our hope.

I am aware of the ways in which charity has been and continues to be misconstrued and emptied of meaning, with the consequent risk of being misinterpreted, detached from ethical living and, in any event, undervalued. In the social, juridical, cultural, political and economic fields — the contexts, in other words, that are most exposed to this danger — it is easily dismissed as irrelevant for interpreting and giving direction to moral responsibility. Hence the need to link charity with truth not only in the sequence, pointed out by Saint Paul, of veritas in caritate (Eph 4:15), but also in the inverse and complementary sequence of caritas in veritate. Truth needs to be sought, found and expressed within the “economy” of charity, but charity in its turn needs to be understood, confirmed and practised in the light of truth. In this way, not only do we do a service to charity enlightened by truth, but we also help give credibility to truth, demonstrating its persuasive and authenticating power in the practical setting of social living. This is a matter of no small account today, in a social and cultural context which relativizes truth, often paying little heed to it and showing increasing reluctance to acknowledge its existence."
St. Nicholas of Myra is the Patron Saint of Sailors, Bakers, and Children. He is a Patron Saint of Russia, Greece, and of various areas in Italy.
Posted by CatholicSoldier at 2:46 PM