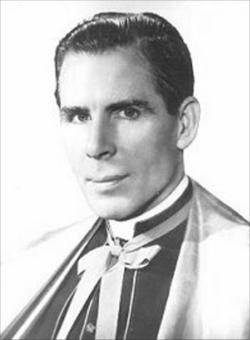 On December 9th the Church will remember the 30th Anniversary of the death of the great Bishop Fulton Sheen. The Church for twenty years was blessed with his personality, wit and wisdom on Radio during The Catholic Hour. He moved to television and for seven years was the host of Life is Worth Living. While alive he was recognized for an Emmy for Most Outstanding Television Personality. While his style may be unique for today's audience, there is something nonetheless electric to it, that captures the imagination, even if at times it seems theatric.

He was an American C.S. Lewis and his impact carries on to this day. As a testament to his solid Orthodoxy and Christianity, not only is he still seen on EWTN (a Catholic Network), but also the Trinity Broadcasting Network (an Evangelical Protestant Network).

He spoke to his age with timeless Christian truths. He did not water-down the message, but spoke it courageously and with conviction. He was the first real televangelist and most of those who came after him, pale in comparison.

There is an ongoing Cause for the Canonization of this great American Catholic Evangelist. John Paul the Great said of the late Bishop Sheen: "You have written and spoken well of the Lord Jesus! You have been a loyal son of the Church".

Archbishop Timothy Dolan of New York will be offering a special commemorative mass at St. Patrick's Cathedral in honor of the 30th Anniversary of his death. Archbishop Dolan said of Sheen: "My professor, John Tracy Ellis, used to say there’s never been anybody who’s been able to communicate the timeless truths of the Catholic religion to a very timely culture, namely the United States, like Fulton Sheen – without diluting any of the essentials of our Catholic Faith. He was able to present it in an eminently attractive way and that has always inspired me..."

As one contemplates the current state of Roman Catholicism in the United States, one cannot help but yearn for a new Bishop Fulton Sheen. Someone who will have the courage and personality to present the timeless Catholic Faith to a population that is increasingly opposed to it. While the Catholic Church in America has some strong Bishops like Bishop Tobin in Rhode Island and Archbishop Chaput in Denver, one misses the wit and brilliance of Bishop Sheen's presentation.

The Teachings of the Church do not change, but we can adapt to the technology and the age to present it in an even more relevant way.
Posted by CatholicSoldier at 2:24 PM

Rocco Palmo at Whispers in the Loggia has more information on Bishop Fulton Sheen on his Blog:
http://whispersintheloggia.blogspot.com/2009/12/fulton-great-30-years-on.html