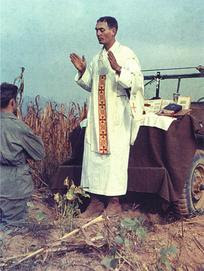 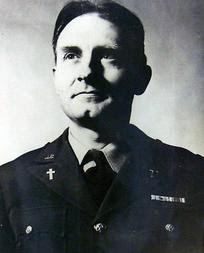 By JOHN MILBURN
The Associated Press

TOPEKA, Kan. — As his fellow prisoners of war returned home from the Korean War, they shared stories of self-sacrifice about Rev. Emil Kapaun, the humble priest from Kansas.

The prisoners of the 8th Cavalry Regiment spoke of how Kapaun, an Army chaplain, continued to look after his men even though he was wounded and sick himself. Risking his own life, Kapaun would sneak out after dark to scrounge food for those too weak to eat, fashion makeshift containers to collect water and wash their soiled clothes.

Kapaun died at the camp hospital seven months after he was first taken captive by the Chinese in 1950. More than a half-century later, the Army's top civilian leader has recommended that Kapaun, who is also a candidate for sainthood, receive the Medal of Honor.

For the Rest of the Article please visit the Atlanta Journal Constitution Website.

There also is a "cause" currently before the Congregation for the Causes of the Saints for Fr. Kapaun. For Fr. Kapaun to be declared a Saint the Congregation must investigate his background and deem it worthy of emulation while also validating a minimum of Two miracles that can be attributed to the individuals intercession with Jesus Christ. Earning the Medal of Honor as a Catholic Army Chaplain would certainly indicate a life worthy of emulation in the service of others.

If two miracles can be validated, Fr. Kapaun would make an excellent candidate for the Patron Saint of Catholic Army Chaplains. Not only did he live a holy and exemplary live, but also set an example for Army Chaplains by his heroic actions while a Prisoner of War to the North Koreans.
Posted by CatholicSoldier at 5:22 PM