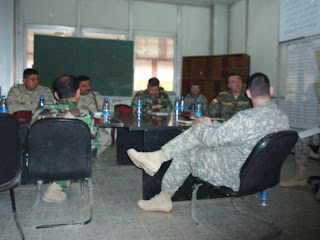 Partnership is the buzz word today for what we are currently doing in Iraq. We are partnering with our ISF (Iraqi Security Forces) Brothers to improve the security in our Area of Operations. With the signing of the Bi-Lateral Security Agreement (also known as SOFA) we are partners (the lesser partner) with our Iraqi counterparts. We are here to facilitate their improvement in capabilities, to assist them in operations, and to grow them into a professional military force.

Good units have been doing this in Iraq for years. The 172nd Stryker Brigade Combat Team (my last unit) was partnered with two Iraqi Army Divisions in Ninewa Province. By the end of the Brigade's time in Mosul, the Iraqi Army was in the lead with CF providing support for their operations. The full implementation of Counter-Insurgency Tactics during the Bush-Petraeus Surge was able to turn around security, partially through the full partnering with the Iraqi Security Forces. When we deployed to Iraq this fall, we continued that strategy and partnered with the local ISF.

When the new Division HQs came in they implemented a new terminology for partnership: "Through,With, By". Those three words govern how we operate within the ISF. Granted, everyone who listens to those words usually will switch the order and also will give you a different definition for what exactly it means. However, it is still fundamentally partnership. We work through the Iraqis, we work with the Iraqis, and we work by the Iraqis. As they stand up (to use the words of former President Bush), we will stand down. That is the definition of partnership. We are working with the Iraqis to assist them. Our Rifle Companies and Platoons have been partnered with the Iraqis for years now, accompanying them on operations and providing tactical oversight.

As a Staff Officer, we haven't had the same level of partnership with the Iraqi Security Forces. That is changing. I've begun holding regular meetings with my Iraqi Army S2 partners. These staff meetings can be very interesting, especially when you consider the substantial language differences. Terps (interpreters) are an incredibly important asset that enable these operations. At times the Iraqi Army Officers get really animated and start talking really fast, and all I can do is sit back for the next 15 minutes. The Terps do their best, but sometimes you completely lose the conversation and just sit there.

Our Joint S2/S3 Meetings involve discussions about security and specific events we are preparing for. Afterwards, the meetings are followed by food. We jokingly refer to it as a "Goat-Grab". The local fare isn't that bad, except when you bother to consider where the water came from. I love the bread, that's a definite high point for me. So partnership does have its definite positives.

We had our first recent BDE wide S2/S3 huddle with the Iraqi Army. It was quite different from previous meetings as we sought to share with the Iraqi Army what we were seeing and what operations we were undertaking. It might have been simpler, but it probably went further into ensuring continued security success. After the meeting, the IA general present took some time to thank us and every American. He said he was grateful for the sacrifice they have made in blood to bring democracy to Iraq. It's something that isn't said enough, but does need to be said. Even if it was part of the pleasantries, it was nonetheless, true.

Our partnership also takes on a level of "Teach, Coach, Mentor". That's a phrase we use for our training back in the states. It's how we develop junior soldiers and leaders through the Teach, Coach, and Mentor program. We now have to do that for the Iraqis. We have to teach them how to do their jobs, coach them on it, and then provide the oversight/mentorship for them. It's all part of our partnership. It’s how we move forward, and it’s how we can return home, having set Iraq on the course for success and security.
Posted by CatholicSoldier at 10:58 AM