It will be Timothy Cardinal Dolan 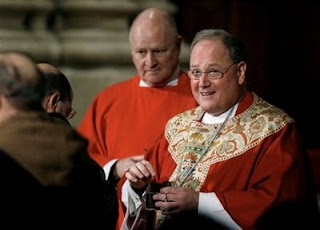 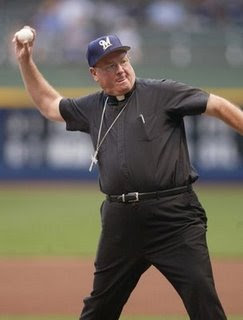 Church watchers have been expecting it. It is finally reality.

Archbishop Timothy Dolan of Milwaukee has been elevated to lead the Archdiocese of New York. It is an appointment that will certainly bring a Cardinal's hat to the young archbishop.

Archbishop Dolan is a man of incredible energy. He embodies the dynamic Orthodoxy that John Paul the Great said the Church needed. He is incredibly personable and should be able to reach out across the Archdiocese in a way not seen since the great John Cardinal O'Connor. He improved vocations in the Milwaukee Archdiocese from the moribund levels of Archbishop Weakland and he should do the same in New York. He inherited a diocese in disarray from the heterodoxy of Weakland and has done a great deal to restore the vitality of Catholicism in Milwaukee. For that, Milwaukee Catholics will be eternally grateful.

It is a position of awesome responsibility, but it is a role he will be able to fill. When Francis Cardinal George of Chicago steps aside in a few years, Archbishop Dolan (by then certainly a Cardinal) will step in as the leading voice of the Catholic Church in America. It will be an unquestioningly Orthodox voice, but it will be truly Catholic, compassionate, and pastoral. It will be clear.

For more please read First Things, Rocco Palmo's Whispers in the Loggia, and the Milwaukee Journal Sentinel.
Posted by CatholicSoldier at 10:38 AM

A Cardinal's hat for sure, but he'll probably have to wait about three more years for it. The pope doesn't like have two cardinal electors from the same diocese, and Egan won't be past voting age until then. Oh well...if he follows Egan's lead and lives to see retirement, he'll head the archdiocese for at least 16 years, so he's got some time to play with!