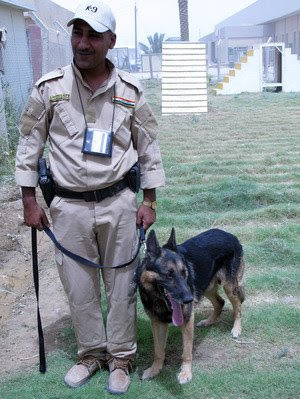 Military Working Dogs (MWD) play an important role in Full-Spectrum Stability Operations. In Iraq the US Military utilizes these dogs for a variety of roles; though they are primarily used in the role of Bomb Detection. Dogs have been used by militaries for hundreds of years. The Imperial War Museum in London has a memorial to the MWDs who died during the Great War (World War I). Military Working Dogs served the US in both World Wars, Korea, Vietnam and now in the Global War on Terror. These brave and trained dogs have paid a price, with many being maimed or killed in action. My own Brigade suffered a loss this fall when Jock was killed by a road-side bomb. These dogs save countless lives by their actions and are a true force multiplier and enabler.

As we stand down, so do our Dogs. Yet, the expertise they bring to the fight remains important. NPR recently featured a story on All Things Considered about the Iraqi Military's efforts to utilize Military Working Dogs.

Quil Lawrence is the author of the story which I will briefly quote here, though for the rest, please check out the story:

"As U.S. combat troops begin a gradual withdrawal from Iraq, they continue to train and advise Iraqi forces, which are increasingly responsible for maintaining security. But one of the most useful security tools is a hard one for Iraqis to accept — not because of technical difficulty, but because of a cultural taboo.

Sniffer dogs are universally recognized as the most effective means of detecting explosives. But in Iraq, as in much of the Arab world, dogs are considered unclean.

"We must help people understand about dogs, and showing that they can prevent bombings is a great way to change their image," says Iraqi police dog handler Salim Saeed Ahmed."

For the rest again, click this link.
Posted by CatholicSoldier at 11:43 AM