It's All About Partnership 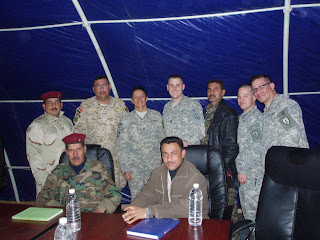 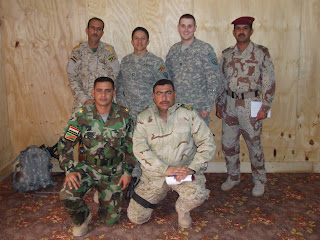 Planning is a long process in the US Army, but one that enables future operations to be set up for success. Planning is also something the Iraqi Army does not have a lot of experience with and therefore is one of the most important areas where we can mentor them and help to build up their overall capabilities. Combined Planning (IA and CF) certainly has its comic moments, but it is also truly rewarding as we help professionalize a military that a few short years ago did not even exist. Many of the Iraqi Army Officers are eager to please and have a desire to learn, provided you treat them with a certain level of respect. In many cases our counterparts "out-rank" us, but when it comes to experience and abilities, the US soldier is superior. My battalion is partnered with an Iraqi Army Brigade (BDE). My counter-part S2 is the BDE S2 for the BDE and holds the rank of Lieutenant Colonel (the same rank as my battalion commander). I give him a level of deference and respect and use the term "Sayydi" when speaking to him, but at the same time he is eager to please and to listen and to learn.

Over the course of the last few weeks we have significantly increased our level of combined planning and the number of meetings we conduct with the Iraqis. Not necessarily in support of any operation, but in support of partnership with the Iraqi Army. We attend their Targeting Meetings, we have a joint Security Council Meeting, we have an Intel Fusion Meeting, etc. We are working with the Iraqi Army Staff, not as a subordinate force (which is sadly how many Iraqi Army units were treated for a long time), but as an equal and valuable partner in our combined mission in Iraq. In the past the Iraqi Army staffs were completely ignored as we focused our partnership with the company and below. This partnership was important at the time, and especially during the violent moments of 2005/6/7. However, as security has improved, the focused shifted to the Iraqi Army as a whole. It is a comprehensive approach to partnership that recognized the long-term goal is an Iraqi Army that is capable of independent operations and to stand on its own. While in the past we could get away with just grabbing an Iraqi Army unit to assist us, the current security situation, SOFA, and our mission require a more total and integrated approach to partnership. A partnership that benefits them to the same degree, if not more, as us.

It is a long process. While some seem to believe that a military can not only be assembled quickly, but made effective, the truth is something completely different. It took the United States of America nearly four years to build a military capable of standing up against the British as Washington's Army did at Monmouth. That was only one battle and it was a draw. The performance of the United States Army in the War of 1812 (in open battle), with the exception of General Winfield Scott at Chippewa left a great deal to be desired. The first real war in which the United States fought well was the War with Mexico, and even then it was far from a truly professional military. Building a military takes time and after a few mis-steps, we are on our way to build an Army for Iraq that will be capable of defending her borders and secure the peace.

It's all about Partnership.
Posted by CatholicSoldier at 9:07 PM