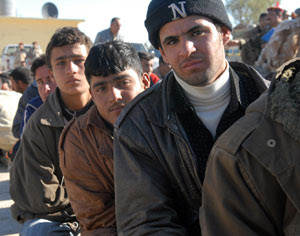 One of the weapons employed by GEN Petraeus during the surge was an Iraqi Organization that came to be known as Sons of Iraq (SOIZs). In many cases these SOIZs were former insurgents (nationalists and rejectionists) who had spent the previous two years fighting Coalition Forces and the Iraqi Government. Yet, their ideology was never the same as the nihilist visions of Al Qaeda and the sweeping destruction and bloodshed that it brought. Rather, they wanted a voice in the new Iraq. The old Iraq of Saddam’s Baathist Party was a Sunni-led affair. The Shi’a majority was exploited and oppressed by the Sunni minority. With the fall of Saddam and the installation of a democratic system, the Shi’a found themselves in charge. Many Sunnis could not comprehend this and turned to the insurgency. The great victory of the surge was bringing many of these Sunnis back to the table.

Al Qaeda has been an important tool in bringing Sunnis. The Suicide Attack in Kirkuk targeted Sunni Arabs and Kurds. The undeniable truth is that Al Qaeda, for all its rhetoric against the Crusaders and Zionists, kills mostly Muslims. The Arab street recognizes that fact and AQ as an organization is losing its support quickly. Ayman Al-Zawahiri's recent rant against President Obama even drew negative comments from jihadist websites; Al Qaeda unhinged?

The Tribal Awakening of late 2006, early 2007 was the by-product of hard work from US Military and State department officials and also the product of Al Qaeda’s actions. The Tribes of Anwar awoke and turned what was once an entire province of AQIZ into one of the safest in Iraq. This awakening spread to other tribal areas of Iraq and in others CF formed the groups known as SOIZs. They were initially known as CLCs (Concerned Local Citizens). These neighborhood watches actively assisted the US Military in hunting down AQIZ in its former safe havens. Michael Yon provides some brilliant insight into Operation Arrowhead Ripper that drove up into Baqubah in 2007 spearheaded by 3/2 SBCT. He documents many cases where the soldiers of 3/2 were assisted in their combat operations by former insurgents (now CLCs), who led them to AQIZ safe houses, caches, and homes to drive AQIZ out of Diyala Province. Baqubah, once the capital of Al Qaeda’s “Islamic State of Iraq” saw the significant AQIZ presence driven out. That presence still exists to one degree or another in Diyala Province, but Al Qaeda does not have the strength in once had. It is still a dangerous enemy (as evidenced by the recent Suicide Attack in Kirkuk).

The Awakening and Sons of Iraq were vital components of the surge that enabled for more effective combat operations to pressure and defeat AQIZ. These Iraqis rejected the dark vision of Al Qaeda and chose one where they could have a voice in the future of Iraq. In Baghdad (at the present) and across Iraq (later) the Iraqi Government is assuming control of these Sons of Iraq to bring them into the security apparatuses of the GOI or to provide civil service training and jobs. In theory the Government of Iraq is recognizing the vital role the SOIZs played in improving the security of Iraq while at the same adapting to new challenges that lie ahead for the country.

I have included some interesting reads on the Sons of Iraq transition that has now reached Diyala Province. It is a very important mission and one that US Soldiers are focused on assisting our Iraqi partners in completing successfully. It is another step in Iraq's march toward sovereignty and security.

Sons of Iraq briefed on transition.

Another article about the transition.

And an article from the Stryker Brigade News site.
Posted by CatholicSoldier at 7:29 PM