Sarah Palin - Out of Right Field 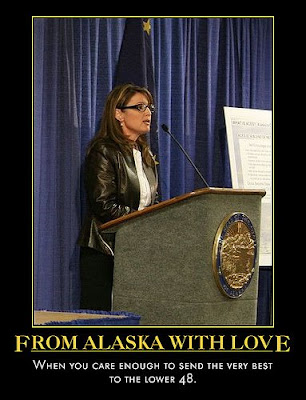 Driving around one sees numerous bumper stickers that declare, “Alaska Girls Rock!” or something else to that effect. It would appear that the campaign of Senator John McCain took notice of that. In an election that features a Presidential candidate originally from , it only made sense for to join the party.

Sarah Palin is hugely popular in the State of . She is a true reformer who took on ’s political establishment and gained some significant victories. Politically speaking in what is expected to be a down year for the Republican brand, it can only be a plus that the political establishment in is dominated by a Republican Machine. This is the state of Senator Ted Stevens and Representative Don Young who pretty much define wasteful government spending and privilege (i.e. Bridge to Nowhere). Sarah Palin has accomplished a great deal in her short time as governor of Alaska, her time on the Oil and Gas Commission for the state (Alaska is an energy rich state), and mayor of Wasilla. As Ethics Commissioner of the Alaska Oil and Gas Commission, she blew the whistle on legal and conflict of interest violations on the board. In 2006 she first defeated the incumbent Republican governor in the primary before beating the former Democratic governor of . She has challenged both Ted Stevens and Don Young, even supporting a primary challenge to Congressman Young (the outcome of which is still undecided). She targeted appointments made by the defeated governor, returned windfall state revenues to the people, and has pushed for a new Natural Gas Pipeline in the state to increase energy supply both in Alaska, but also in the Lower 48.

As a Catholic it is exciting to see someone selected to run for this position with such strong pro-life credentials. Sarah Palin gave birth to her fifth child, Trig, this year. Trig was diagnosed with Down’s Syndrome, but the Palins wouldn’t consider an abortion, the fate of nearly 90% of children diagnosed with that chromosomal anomaly. Sarah Palin is a politician who not only speaks pro-life and pro-family values, but lives them.

She is also the epitome of the American dream and the very definition of an Alaskan girl. Her husband works on the , is a commercial fisherman, and races Snow-Machines (the Alaskan word for Snowmobiles). Sarah Palin hunts caribou, reportedly makes a mean moose stew, and is a lifetime member of the NRA.

The Palin’s oldest son Track is a member of the same Brigade Combat Team that I am a member of. (Full disclosure, I’ve never met him and I have no idea which unit within the Brigade he is actually in.) Track is an American patriot who wants to serve his country in the same fashion as many others; he probably doesn’t want to be a celebrity, though I won’t complain if it means (potentially) a vice president visits my unit during our deployment.

(Speaking of deployments, my Brigade’s deployment ceremony is on September 11th of this year. The date was obviously chosen for its significance to underline what exactly we are fighting for and what is at stake.)

Congratulations Governor Palin on your selection by the McCain Campaign. This historic campaign will either result in the first female vice president or the first African-American president. Despite the people who want to tear down this country and what it stands for, this simple fact highlights just how good and noble is. is not racist. is not sexist. In , truly dreams can come true. is still a wonderful country. Let the real campaign begin (I’m glad I’ll be deployed - I won’t have to watch political advertising for the next two months!).

Posted by CatholicSoldier at 8:17 AM

Not to worry. We can forward all the links for you to watch the ads!