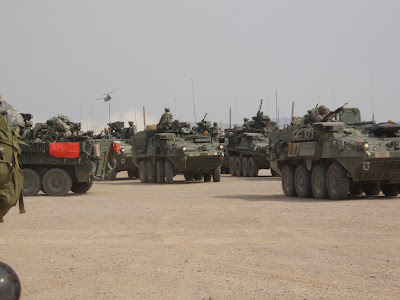 My unit, the 1/25 SBCT (Stryker Brigade Combat Team) conducted their Mission Readiness Exercise (MRE) at the National Training Center (NTC) this month. The MRE is a two-week training event in “the Box” at . The MRE isn’t so much of a test to be passed, as an evaluation to identify what a unit’s strengths and weaknesses are. For the purposes of Operational Security (OPSEC), this entry will not get into those areas in much detail (in the possible, but unlikely, event that Abu Bad-Guy is a reader of this blog), but deal with the basics of our units MRE.

Our training exercise at NTC was conducted in the fictional “ ”, supposedly located somewhere in . (For bound units, “” becomes a fictional Afghan province). During the days prior to 9/11 the NTC used to be the site of epic clashes between the famed OPFOR (Opposing Force), armed with modified “Soviet” equipment, against visiting Regular and National Guard units. Inevitably the OPFOR won the exercise, in part due to their familiarity with the area but also because of their excellent training. As the has transitioned from a conventional Cold-War style conflict (tanks v tanks on the Central Front) to the present day Full-Spectrum Fight (FSO, that is as much nation building as fighting), the OPFOR has changed as well.

Instead of an empty desert, has numerous roads, towns, and business sites which are designed to test a unit’s capabilities in this new setting. NTC contracts hundreds of individuals to populate these towns and villages and drive along the lonely roads connecting them. These roll players are designed to give texture to the training and a semblance of a local population. Many of these roll players are in fact Iraqi in origin (either by birth or descent). Others are members of the 11th Armored Cavalry Regiment (the famed OPFOR) who serve as the fighters of Al Qaeda, Sunni Insurgents, and Shi'a Militiamen. This created a situation for a patrol where the first language of the locals was Arabic. This stresses the importance of developing some basic Arabic familiarity in order to interact with the locals at the NTC, but more importantly, in itself.

During our rotation at NTC, we had to leverage all the assets available to a unit within a Brigade Combat Team to conduct the full breadth of missions expected of it. We have Civil Affairs (CAs -- assisting in building up infrastructure, etc), Tactical Psyops Teams (TPTs, reaching the populace with our Information Operations messages), Dogs (MWD - bomb sniffing), ANGLICO (Air Naval Gunfire LIason Company - leverage fixed wing and rotary wing aircraft for Close Air Support), EOD (Explosive Ordnance Disposal -- clearing the roads of IEDs) and others attached as enablers. The enablers job was to assist the combat unit conduct its mission by lending expertise in areas where we have requirements but not necessarily the specialized personnel. While not necessarily the focus, their mission is vital to the success of any unit in FSO.

The individual unit must work on providing security for our respective Area of Operations (AO) by deliberately targeting the terrorists with lethal operations (capture/kill), but also leveraging non-lethal means to pull the population away from the terrorists. Terrorists and insurgents rely on the local population - remove the support of the local population and the insurgency withers ( an example of this is Al Qaeda in much of today).

That is what makes the Counter-Insurgency (COIN) pioneered by General David Petraeus so important. No longer is the COIN fight about playing “whack-a-mole” and “body-counts”. Rather the COIN fight is first and foremost focused on the population. That population (at NTC, the roll players of ) is the center of gravity. The goal of an effective COIN fight is to pull these people away from the insurgency toward the side of the legitimate actors (i.e., the Iraqi Government , ISF, and CF).

FM 3-24 is the manual that articulates this doctrine in regards to COIN and is the governing document behind the success of the surge in and . The NTC recognizes this and trains to this standard, turning combat commanders into mayors, engineers, and relief workers in order to assist the local Government provide for its people. Our Battalion Commander and company commanders had to regularly interface with the city mayor, the city council, the Iraqi Police commander, and the Iraqi religious leaders. The individual soldiers had to conduct joint operations with Iraqi Police, Army, and Sons of Iraq (SoIz) and interact on a daily basis with locals seeking to survive in a difficult situation.

The has adapted to this fight. While it is very difficult to provide a realistic response time (Full Spectrum Ops is only 8 days), the emphasis on it underlines its overall importance and the need to plan for the non-lethal operations necessary to providing the basic needs of the population and reaching them with a message of hope.

It is important that every operation have an Iraqi face as we conduct out interactions with the Iraqi population. As the great insurgent leader T.E. Lawrence said, “It is better for the Arab to do it tolerably well, than for us to do it perfectly”. That is the essence of a Counter-Insurgent Fight. The National Training Center teaches those lessons to every unit deploying to Iraq and Afghanistan. The training received at the NTC is one of the reasons that the fight in Iraq has turned around and we are now winning the COIN fight.

Posted by CatholicSoldier at 2:38 PM

Glad you're back, dude. Thanks for the informative post.

Any chance of us getting together while you're around?